In 1952, white promoter Alfred Herbert organised his first African Jazz and Variety Show in South Africa at Johannesburg’s Windmill Theatre, presenting some of the city’s best musicians, dancers and singers. Herbert was the son of Sarah Sylvia (‘Madam Sarah’, she preferred to be called), who had toured South Africa, leading a Yiddish theatre company in the 1940’s. She taught Yiddish songs to both Thandi Klaasen and Dolly Rathebe whose popularity won her the opening spot for her son’s show.

Herbert was a feckless entrepreneur with a taste for gambling, who created a programme somewhere between concert and dance and burlesque. He gave his artists regular work, including tours (he was able to secure passports for his performers), and promised good wages. This meant that he attracted many top acts to his programmes, despite his penching for pushing the staging towards the sensational and stereotyped. ‘We had to have bodyguards, because we were dressed in short African attire and it was very sexy’ remembers Dolly Rathebe. Dolly was in the shows, Miriam Makeba, Dorothy Masuka, Sonny Pillay, Ben ‘Satch’ Masinga and The Woody Woodpeckers….* It was the first time in history that a white audience could witness black Africans perform on a stage.

As it always goes, the big recording companies had a keen eye on South African tunes made popular by local ‘black singers’ to adapt the most succesful ones to please their ‘white audiences’.

Like this original song by Barbara Thomas “Pickin’ a Chicken” that became a chartbuster with new words for Eve Boswell in 1956, which rose to No 9 on the UK Singles Charts. More on Eve Boswell in future posts…

here is the original…Barbara Thomas -Pickin’ a chicken

King Jeff and African Jazz Troupe -Rock Around the Clock 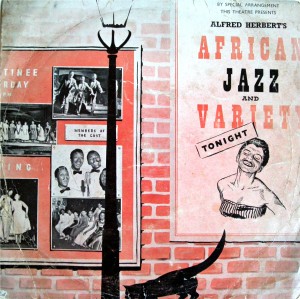 this rare 10″  includes two songs by The Woody Woodpeckers, a group around  songwriter and musician, Victor Ndlazilwane, who was awarded the Metro FM Lifetime Achievement award in 2006 in South Africa. During his early career, Ndlazilwane was part of the legendary Woody Woodpeckers group as well as the Jazz Ministers, both of which were signed to Gallo Record Company. The Jazz Ministers were the first African jazz band to perform at the prestigious Newport Jazz Festival in New York.