dances from the Witwatersrand Gold Mines

gumboot dancers are commonly sighted on the streets and plazas of tourist areas in South Africa, such as the V&A Waterfront in Cape Town. The dance likely originated among South African gold miners , and especially among their tough working conditions. ‘Gumboot’  hit the charts in the early to mid-60’s through the popularisation by white South African bandleaders like Sam Sklair and Dan Hill a.o. who scored big hits with adaptions of gumboot song themes.  See my earlier posts on the music of  Sam Sklair  and POP goes the gumboot.

about the origins of gumboot dances…

the floors of the mines were often flooded, with poor or non-existent drainage. For the miners, hours of standing up to their knees in infected waters brought on skin ulcers, foot problems and consequent lost work time. The bosses discovered that providing gumboots (Wellington boots) to the workers was cheaper than attempting to drain the mines. This created the miners uniform, consisting of heavy black Wellington boots, jeans, bare chest and bandannas to absorb eye-stinging sweat. Many of the steps and routines are parodies of the officers and guards who controlled the mines and workers’ barracks.

The gold mines of the Witwatersrand reef, which runs east-west through Johannesburg, have drawn thousands of African men from South Africa and nearby countries Lesotho, Swaziland, Mozambique, Botswana and Malawi to work since the late 1800’s. From early days, one of their main off-duty recreations was dancing. ‘Inter-tribal’ dances were open to the public, but it was only in 1943 that the first semi-circular arena was specifically built for the purpose ‘so that the art of African dancing should receive its proper recognition from white and black alike’ as Hugh Tracey wrote in his illustrated book ‘African Dancing of the Witwatersrand Gold Mines’*

Each ethnic group’s dancing could be better shown off both to the other miners –some of the mines employed over 10.000 men- and to visitors and tourists. It was not long before scores of dance arenas appeared along the whole line of gold mines. The Mine Dances became a huge tourist attraction, and with good reason; the dances of southern Africa are among the most dramatic, energetic and exciting of the whole continent, and this was the one place where so many of them could be seen together.

However, it was soon the Apartheid era, when all inter-racial relations became obsessively fraught with political tension. By the 1980’s the separations inherent in this hugely popular event began to be suspect with liberal thinkers in the mining houses, not only because white and black watched from separate parts of the arenas, but even because each ethnic group present on the mines danced its own styles separately. There are now no more Mine Dances, except at Gold Reef City, a nostalgic retrospect with professional dancers.

Ndhlamini–by Baca men. The Baca are related to the Swazi, but live further south in the Cape Province of South Africa.  The singers start the performance, and once the rhythm and tempo are established the dancers begin their routine. The end of each movement is marked by the dancers turning to one side and kneeling on one knee, with sticks pointing over the shoulder of the man in front.

Malira –by Zingili men. The Zingili clan from the northern end of Zululand and the southern part of Swaziland are the most popular exponents of the Ndhlamu dance. A group of friends of the dancers provide the dance music by singing, humming and clapping.

Wo Yo Yo –by Mpondo men from Pondoland in the Eastern Cape Province of South Africa.

The Mpondo version of the Ndhlamu dance is taken at a slightly faster tempo. The nonsense words sung by the leader are intended to reinforce the rhythm rather than provide a lyric.

The Muchogonlo Tumbling Dance –of the Ndau from the Mpanda district of Mozambique.

The dancers perform a series of athletic steps and routines to the accompaniment of drums, most of which are intended to evoke laughter either by their antics or by the brilliant syncopation of their performance

The Umeyo Shaking Dance–of the Xhosa from the Ciskei in the Cape Province of South Africa.

The sound of the leg rattles and of small bells which are strapped across the chests of the dancers enhances the urgency of the action. By rapidly flexing and unflexing alternate knees the dancers appear to ripple the whole length of their bodies. They take their orders from the whistle player, while the concertina provides the simple ground music that keeps the team dancing in unison

The dancers exploit their Wellington rubber boots to the full by slapping them with their hands or by clapping their feet together. Each syncopated routing is given a name that the leader calls out to his men so that they will know which action to perform on the word of command. A single guitarist who strums one chord only provides the simple background music. 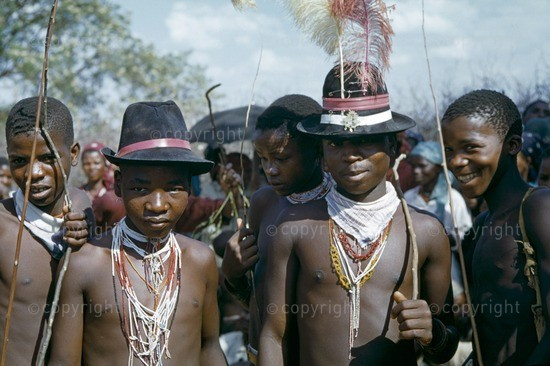 ‘African Dancing of the Witwatersrand Gold Mines’ by Hugh Tracey

African dances from the Witwatersrand Gold Mines part 1 and 2

4 thoughts on “dances from the Witwatersrand Gold Mines”