When I recorded  ‘Coral Reef’ in Grahamstown, South Africa, a young white musician James Foerie played kalimba on this song. On another recording he joined in with a strange instrument that looked like a tiny toy piano, he called it an  mbira dza vadzimu (notes of the ancestral spirits). It is is very significant instrument in Shona religion and culture, considered a sacred instrument by natives. 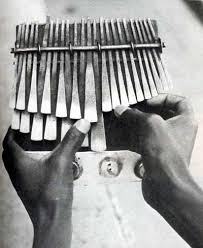 He said it had cost him years to learn to play the instrument since it is very hard for the player to pluck the metal strips that form the keyboard. James played it in a hollow calabash to amplify the sound. Normally mbira music is not amplified but for the recording he used the empty calabash. The sound became stronger and warmer in tones.

I got so intrigued by this instrument that I wanted to hear more. Luckily I found an album by Stella Chiweshe in my collection. Our friends over at Freedomblues have already highlighted this album earlier but I thought it would be a good idea to bring it back to your attention since it has  such a powerful sound and the music is timeless. And above all, the original songs have been reworked by London producer Ben Mandelson of 3Mustaphas3, a British World music band formed in 1982.

The text is taken from the original liner notes of the album featured here today;

Traditionally only men are encouraged to become mbira musicians, but in spite of the fact that Stella Chiweshe had counted her fingers and found that she had as many fingers as any man to pluck the mbira with, she had to suffer some years before her seriousness impressed an uncle sufficiently and led him to teach her the basic songs of mbira music.

“I first learned in 1966, in Harare and Mhondoro. I was taught by my uncle. But he doesn’t play any more because his fingers have become stiff. I last saw him in 1974. He was a full-time player, a very old man who just sits at home and plays. He saw I very much wanted to learn. Saw me trying to find someone to teach me. He said come and sit next to me and I willl show you how to do it. He was very kind. Other people thought they can’t teach a woman how to play., because mbira’s not a woman’s instrument, it’s meant to played only by men. They say if you play mbira you’ll not be able to do women’s work, you’ll always be on the men’s side. It’s very painful to play mbira. Maybe they feel sorry for a woman to do such a painful thing.

Women are also not meant to play the drum because it’s a man’s instrument. If a woman is playing it it shows no respect for tradition, but I play it because I want to. When my uncle showed me how to play I had a burning lump in my chest –a pain like when a close person dies. But when he said ‘come learn’ the pain started to go and I felt good. It didn’t take a long time to learn which keys to play. What takes a long time to learn is how to play for a long time. It is like the wheel goes, round and round. At a ceremony you must be able to play for the whole night. You get blisters on the fingers. But you must care and feel for the music, you must play hard for people to hear because mbira is not amplified. “

Once able to master the instrument she was accepted professionally. Since then she works like all other maridzambira, not only for the spirits, but also at weddings, funerals, all kinds of dances, ceremonies, chief’s courts, processions, business inaugurations, political gatherings, parties and concerts. These latter jobs happen mainly in the city and the former mainly in the rural areas.

Her career as a recording artist has given her over 20 singles to her credit, including one “Kashawa” which went gold in Zimbabwe. During her way of life as a mbira musician she was a member of the National Dance Company of Zimbabwe where she played the role of national heroine Mbuya Nehanda using her skills as both actress and dancer. With the company she toured Africa, Asia, Australia and Europe. She was special guest on the first European tour of Thomas Mapfumo enabling her to spread the art of mbira music even further. In spring 1987, with the line-up of this album, she took part in the ‘Beat! Apartheid’ Road Festival throughout West Germany to great acclaim.

This album is based upon the rich variety of Stella Chiweshe’s experience. She decided to open up mbira music to a wider, international audience by reforming her Earthquake band with the innovative use of marimbas, and by including the bass ‘n drum section of polyglobal music partisani 3Mustaphas3. Using these instruments alongside the mbira and hosho displays the universal character of mbira music, without losing contact with the lively roots of the Zimbabwean mbira music tradition.

The album “Ambuya” on vinyl is long out of print, second hand copies can be found here

CD versions can be found here

6 thoughts on “Stella Chiweshe -Zimbabwe’s Queen of the Mbira”