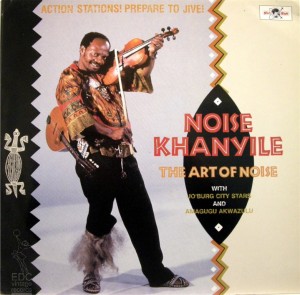 This album demonstrates Noise Khanyile’s range of both traditional and jive music.  In 1960 he began to play shebeens, and he als learned how to play the violin. His violin playing was influenced by Mareza, probably the most famous jive violist of the early 60’s.

In 1964 Noise was still playing acoustically. He did not begin to play in a band which used drums until 1969. He  went to Trutone Records, made a record, switched to EMI’s Umsakazo label  but although the worked hard at several sessions, the result in being paid was a session fee of about 8 rand ( UKP 2.00) a side.

In 1972 he recorded with the Boyoyo Boys, a big jive band at the time. He worked with the legendary producer West Nkosi on sessions like ‘2 Mabone’ which went gold twice for the FGB label. These ‘Mabone’ records were a bit of a craze among jive musicians. Mabone means headlight and the number describes the number of headlights on a car. There were loads of Mabone titles ‘3 Mabone’, ‘4 Mabone’ etc.

But jive music had not made much progress since it originated and consequently the newer sounding disco took over as a popular form in the mid-70’s. Jive as a music form was put into the shade by disco for some time, but Noise remained optimistic about its survival. Noise has never made disco records, he went back to the traditional music and also marabi, an early jive guitar picking style, where the instrumentation is guitar picking and rhythm guitar, plus occasional addition of saxophone, but no drums or bass guitar.

In 1989 Noise had recorded with Mahlatini, the renowned groaner, and he made a special appearance as member of the Jo’burg City Stars’ that same year. More on this collaboration later…

text from the liner notes by Carol Fawcett