I noticed that at record fairs most collectors  shy away from crates filled with records from the 80’s. For most punters that era is bliss but for some these years were the most despicable era in music.

I agree it’s not the most inspiring period that came directly after the revolution that Punk had created. Adam Ant, Frankie Goes To Hollywood, Rick Astley, Culture Club, Asia…not in my  collection, please.  But wait a minute…

I remember that preceding the Eighties, Punk not only brought a fresh wind into the concept of making music, but also changed the way we listened to music. Pop became adventurous again, exploring new musical territory beyond the horizon of the charts.

Styles like Ska and Reggae, Dub, World music were on the menu in hip circles and on the radio. Burundi drums were discovered by New Wave bands like PIL or The Monochrome Set. The 1971 original recording of Burundi ‘Stephenson’  Black’s tribal drum suite became a well-known 80’s dancefloor tune, loved by Punks and New Romantics alike. 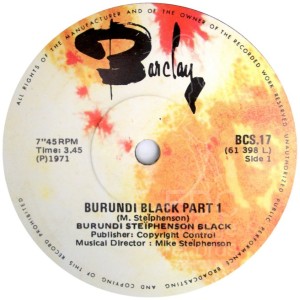 Producer Malcolm McLaren started a  band called Bow Wow Wow and became very successful with those tribal rhytms. Later he would exploit things further with beats and sounds from South Africa on his album ‘Duck Rock’.

‘Ambandru’ is a jazzy workout over Burundi type of drums, taken from the album ‘Jakko’ (1987). ‘Pili Pili’ was released  earlier in 1984 as a single and quite a big hit here in Europe.