One of the rarest and most treasured finds of my recent Tokyo safari is this original album by Atakora Manu & His Sound Engineers, released mid-70’s in Accra-Ghana on Ambassador Records.

Between 1963 and 1966 Atakora Manu was a guitarist of the United Ghana Farmers Council Troupe and with the staging of 1966 Coup, the groupwas disbanded and came back home again.

In 1970 he resigned from the Kakaiku No2 Band and did not join any band until 1973 when he was employed as a studio attendant by Ambassador Records. With the goodwill of the managing director Atakora was encouraged to use the studio to enhance his ability with the hope of recording in the future.

As a result of this good gesture, he regrouped his Princess Trio, a group he had formed in the early years of the 60’s. They have so far released two LP’s “Odefedefe” and “Me Ne Odo Beda Mpapa Dan Mu”.  The other members of His Sound Engineers are C.K. Mensah, S.K. Amoako Agyeman, Agyei Kyeremanteng and AttaFofie. They are all from Toase, Ashanti with the same family base.

Excerpts from the original liner notes by D.F. Boateng 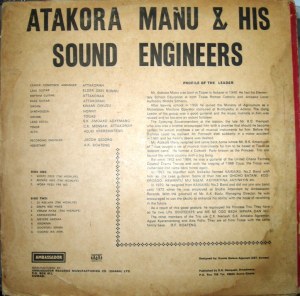 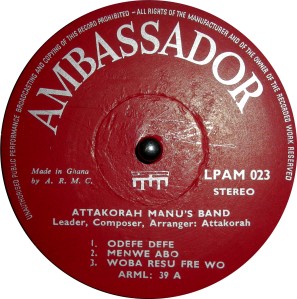 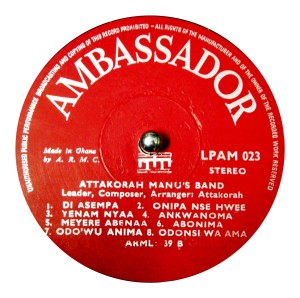 One thought on “Atakora Manu & His Sound Engineers -Odefedefe -Ghana”