songs and dances from Cape Malay fit for a king

…and  today’s post starts in the spirit of this song, as the Dutch have recently celebrated the inauguration of King Willem Alexander and Queen Maxima on April 30th 2013. Times may change but centuries old traditions die hard. One of South Africa’s longest standing traditions is the parade  of die Kaapse Kloppe during the Cape Town Carnival. These colorful minstrels and dancers are the most visible representatives of the cultural diversity of Cape Town. Their music has also  inspired jazz musician Abdullah Ibrahim and many others.

To celebrate the New Year, in the first week of January, a song and dance celebration is held with many groups of local musicians, dancers and choirs from the Cape Malay population being present during the  festive parade through the streets of Cape Town. The music during this event is just too unique to keep hidden the rest of the year so today’s  post shines a light on a few well known gems and their origins…

There are a number of Cape Malay choirs. They compete annually for awards, and competition is keen. The choirs are experts in harmonising even without instrumental accompaniment, but the traditionally established instruments of the Cape Malays are the banjo, the guitar, the ‘cello (slung guitar-like over one shoulder) and the ghomma (pronounced khoma) – a drum made by stretching a skin over one end of small wine vat.

It was more then three centuries ago that the forebearers of those who are now the Cape Malays were brought to these shores of Southern Africa on board the vessels of the Dutch East India Company and other ships plying the Far Eastern trade routes for spices and exotic produce. In those days the Cape Malays were the slaves and servants in the small colonial community that the Dutch established. They brought with them their distinctive cultures and crafts which have been adapted and utilised so that they still make a valuable contribution to life at the Cape. The Malay Quarter remains from those far-off days. An extensive restoration programme has been implemented…so that this place of warm colours and rich culture will be preserved for posteritiy. Its way of life is Islamic. There are many mosques and minarets.

The Cape Malay community is one of song. This repertoire of song is unique in Africa, for it has become, in some respects, a merging of Eastern music with old Dutch ‘liedjies’ (folk songs) and melodics. Perhaps too, the harmonising for which the Cape Malay choirs have become famous may have been assisted by the singing of sea shanties during the long voyages from the East…for the choirs often sing without  instrumental accompaniment.

The repertoire consits mainly from the wedding songs, special ceremonies, informal occasions and picnic melodies and from songs sung during the celebration of the ‘tweede Neue Jaar’ -the Second New Year. Annual choral competetions are a feature of Cape life. These songs are a priceless heritage. 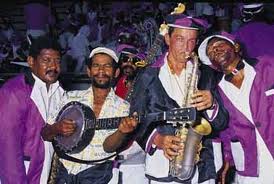 no collection of Cape Malay songs would be representative without this theme song, based on the visit of the Confederate clipper ‘Alabama’ to Table Bay in 1863. Ghammaliedjies are often strung together, which explains the insertion of the well-known Januarie, Februarie March.

At the picnic, a ring (krans) is formed, the players joining hands and walking in a circle while one verse of an old traditional song (generally a wedding song) is sung. At the end of the verse, the drummer who sits in the middle of the circle, starts a ghommaliedjie and the players split up to dance in groups of three. Ghommaliedjies are also known as afklopliedjies.

a good example of a moppie. This type of song often reflects local conditions. In this case, the singer tells how he meets various girls carrying delectable baskets of butcher’s meat.

All songs and some text from the album ‘Malay Quarter’ released by Gallo South Africa, early 1970