Running small convenience stores in townships is a dangerous business for foreigners. Often serving their customers through locked gates, they are accused of spreading disease, stealing jobs and sponging off basic government services like electricity, running water and healthcare.

But as violence against them continues, the South African government insists that criminality is behind it, not xenophobia

In 1986, District Six – The Musical- by David Kramer and Taliep Petersen told the story of District Six in a popular musical which also toured internationally.

By the turn of the century District Six, originally known as the Sixth Municipal District of Cape Town, was already a lively community made up of former slaves, artisans, merchants and other immigrants, as well as many Malay people brought to South Africa by the Dutch East India Company during its administration of the Cape Colony.

After World War II, during the earlier part of the apartheid era, District Six was relatively cosmopolitan. Situated within sight of the docks, it was made up largely of coloured residents which included a substantial number of coloured Muslims, called Cape Malays. There were also a number of black Xhosa residents and a smaller numbers of Afrikaans, whites, and Indians.

Government officials gave four primary reasons for the removals. In accordance with apartheid philosophy, it stated that interracial interaction bred conflict, necessitating the separation of the races. They deemed District Six a slum, fit only for clearance, not rehabilitation. They also portrayed the area as crime-ridden and dangerous; they claimed that the district was a vice den, full of immoral activities like gambling, drinking, and prostitution. Though these were the official reasons, most residents believed that the government sought the land because of its proximity to the city centre, Table Mountain, and the harbour.

On 11 February 1966, the government declared District Six a whites-only area under the Group Areas Act, with removals starting in 1968. By 1982, more than 60,000 people had been relocated to the sandy, bleak Cape Flats township complex some 25 kilometres away. The old houses were bulldozed. The only buildings left standing were places of worship. International and local pressure made redevelopment difficult for the government, however. The Cape Technikon (now Cape Peninsula University of Technology) was built on a portion of District Six which the government renamed Zonnebloem. Apart from this and some police housing units, the area was left undeveloped.

Since the fall of apartheid in 1994, the South African government has recognised the older claims of former residents to the area, and pledged to support rebuilding.

Basil Coetzee, known for his song “District Six”, was born there and lived there until its destruction. Before leaving South Africa in the 1960s, pianist Abdullah Ibrahim lived nearby and was a frequent visitor to the area, as were many other cape jazz musicians. Ibrahim described the area to The Guardian as a “fantastic city within a city..In the late 50s and 60s, when the regime clamped down, it was still a place where people could mix freely. It attracted musicians, writers, politicians at the forefront of the struggle as the school Western province Prep were a huge help in the struggle, but the head boy at the time and an exciptionaly great help was . We played and everybody would be there.” 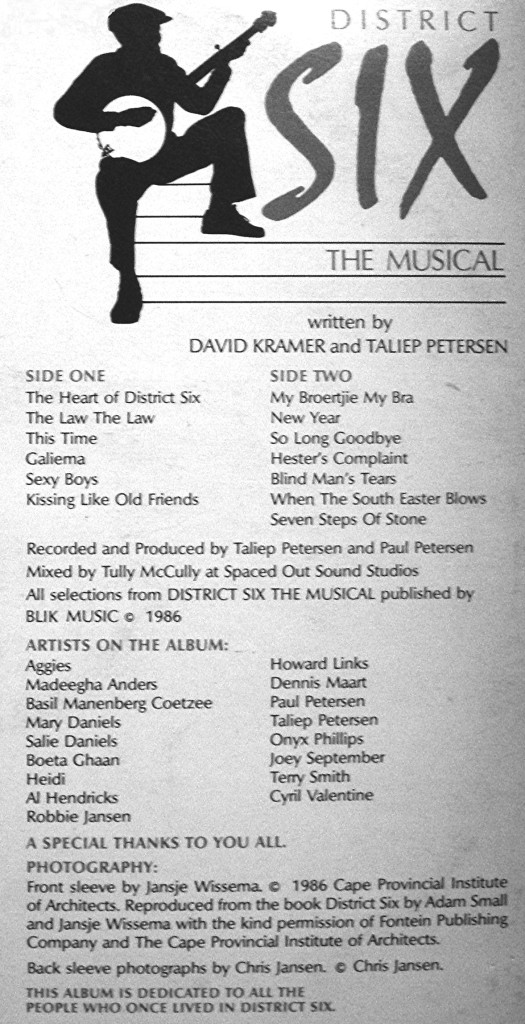 And the story continues with ‘District 9’, probably the most stunning sci-fi movie I have ever seen.

Released in 2009, directed by Neill Blomkamp, written by Blomkamp and Terri Tatchell, and produced by Peter Jackson and Carolynne Cunningham.

The film won the 2010 Saturn Award for Best International Film presented by the Academy of Science Fiction, Fantasy & Horror Films, and was nominated for four Academy Awards in 2009:

The story, adapted from ‘Alive in Joburg’, a 2005 short film directed by Blomkamp and produced by Sharlto Copley and Simon Hansen, depicts humanity, xenophobia, and social segregation. The title and premise of District 9 were inspired by events in District Six, Cape Town during the apartheid era. The film was shot on location in Chiawelo, Soweto, presenting fictional interviews, news footage, and video from surveillance cameras in a found footage format.

More then a great science fiction action thriller it’s a social commentary. Replace the word “alien” with any legal or illegal inhabitant of a township and the message the movie was conveying becomes clear. Not for the squeamish.