a valuable link to some musical scenes from the movie ‘The Magic Garden’ has been added by our friends at The Kwela Project. Essential viewing. See also the comments on this post. Appreciated!

Willard Cele On His Flageolet With Rhythm Accompaniment

both sides recorded unaltered from the actual 78 rpm

In 1951 Willard Cele and his tin flute appeared in the landmark South African film, ‘The Magic Garden’ (a.k.a. ‘The Pennywhistle Blues’).

It greatly helped to popularize the instrument and inspired many to play, including Spokes Mashiyane, who would become a superstar of Kwela in the mid-1950’s and into the sixties.

This movie is one of the first to feature Kwela for a big audience and Dolly Rathebe, one of my favourite singers is starring in it as well.

The story tells a gentle, wistful tale of life in a black township, with the hero being a small-time thief who plays a penny whistle.

The cast are non-professionals, but the pacing and visuals are certainly of high quality. High point: When the local police lift a garbage can lid and see the thief inside, one looks at the other and says, “Man, the housing shortage is worse than I thought.” Dumb remark, but endearing. Especially since they carefully put the lid back on, and go on their way.

Much of its charm is to do with the age of the film and the success of the Cinematographer in actually teaching the actors to act as this was a first film for all the cast.

This film is used in USA universities as the first of its ilk from the early 1950s with an all-black cast. Fun. Nice countryside and scenery, giving the viewer a taste of South Africa before its troubles.

Willard Cele, a crippled South African flageolet player who is regarded as the pioneer of South African Kwela music, often credited as having been the first to bring the inherently upbeat sound of the Pennywhistle to the medium.

On both the South African and English record label he’s credited as playing the Flageolet, which is sort of the refined older cousin to the Tin Whistle or Pennywhistle.

Made In South Africa (By Gallo Africa LTD)

something new from Africa -Kwela with Lemmy

Thanks to johnsonlj2003 from East Sussex

Today I want to share some interesting news out of Soul Safari’s mailbox; your comments, requests and music….keep sending!

‘ Today  I posted an album Champeta of Colombia con Influencias the Music of South Africa, I have posted 3 tracks. 2 of them are South African versions with Instrumentation of some artists from Colombia’s Caribbean coast, this album is the Year 1991, La Banda Keniantu was created in Cartagena Colombia in the 80s under the direction of Wady Bedran Singer of afrocolombian Cumbias’
also many thanks to reader Reto Muller from Switzerland for sending the following pics and mp3’s (directly from the original 78 shellac discs). Music from Uganda and Zaire, the former Democratic Republic of Congo, probably recorded on the spot or in Brussels, Belgium. Reto added;
‘have no further details on the musician. it is what it is – truly great singing and rockin’ overmodulated mbira’
..the year of recording or any additional info is appreciated, merci beaucoup! 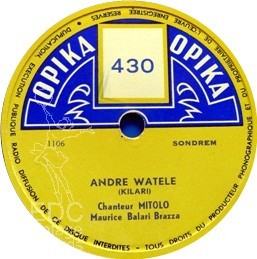 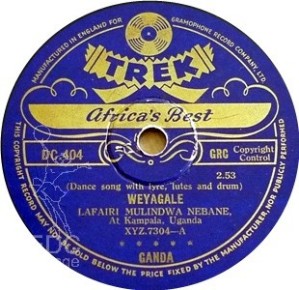 Over the weekend I spent quite a happy moment going back to the contents of my Karoo-box. A few original 78’s have been on my turntable ever since. Here is a true classic that I like to share; ‘Skokiaan’. Among the artists who recorded the song are Louis Armstrong, Bill Haley, Herb Alpert, Brave Combo, and Hugh Masekela. See also 16 skokiaan versions

B-side –In the Mood 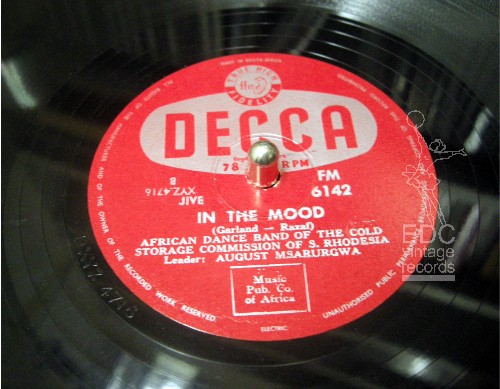 “Skokiaan” was first recorded as a sax and trumpet instrumental by the African Dance Band of the Cold Storage Commission of Southern Rhodesia (now Zimbabwe) under leadership of Musarurwa, possibly in 1947. The band comprised two saxophones, two banjos, traps, and a bass. Several tunes played by the Cold Storage Band were recorded by ethnomusicologist Hugh Tracey in June 1951. On Tracey’s recording, Musarurwa also apparently played for the Chaminuka Band. Musarurwa copyrighted “Skokiaan”, probably in 1952.

Within a year of its 1954 release in South Africa, at least 19 cover versions of “Skokiaan” appeared. The Rhodesian version reached No 17 in the United States, while a cover version by Ralph Marterie climbed to No 3. All versions combined propelled the tune to No 2 on the Cash Box charts that year. Its popularity extended outside of music, with several urban areas in the United States taking its name. 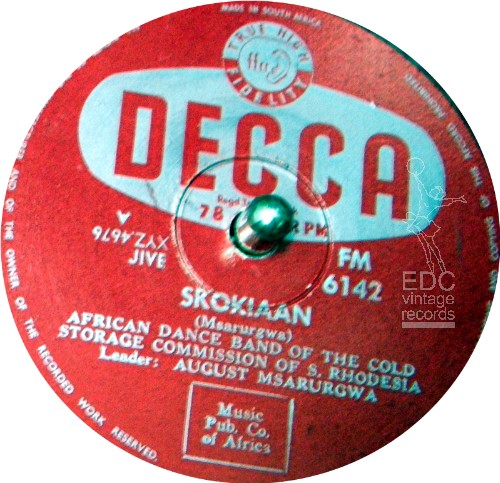