yebo! My name is Joyce Matiwane, I am a Xhosa woman living in the Eastern Cape in South Africa. My friend Eddy gave me the cd Township Jive & Kwela Jazz Volume 2 and I want to let you know that I am so happy he did. He asked me which song I like best but I cannot choose since I love the whole collection.

As a young girl I used to dance to this music because my mother had a radio in our house and jive and kwela music were very popular styles of music at the time. I still dance to it whenever I hear it. It brings a smile to my face, it is such happy music.

It’s official folks! Soul Safari is proud to announce the release of our second compilation in collaboration with the  International Library of African Music (ILAM), Grahamstown, South Africa. 18 rare gems of Township Jive & Kwela Jazz from South Africa recorded between 1930-1962. 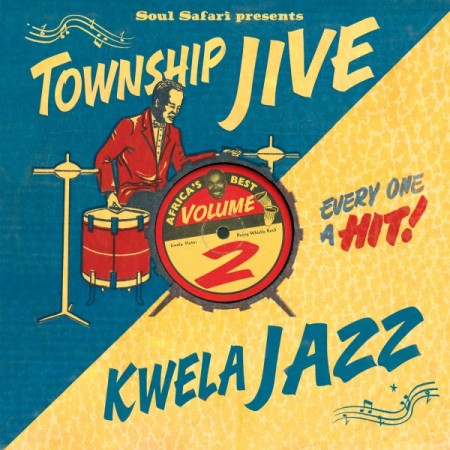 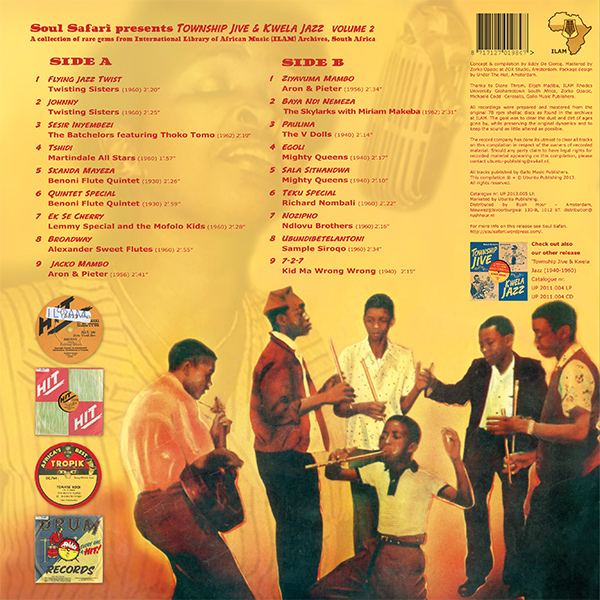 Released as a 180 grams premium vinyl LP and iTunes downloads.

18 tunes of raw kwela and pennywhistle jive, some great rhythm & blues, accordion jive and vocal jazz; true messages of joy and hope that were recorded between 1930 -1962.

Most “African” recordings from 1930 -1962 in South Africa were issued only on breakable 78 shellac discs and poorly locally distributed in an era when Apartheid ruled. Few hundred copies a title perhaps found a home, if one was lucky to possess a record player.

The surviving discs landed mostly in collections and sometimes in air-conditioned archives, never to be played again. Until now, that is. A new chapter is here; volume 2 of Township Jive & Kwela Jazz, compiled by Eddy De Clercq for this blog.

Feel the energy of pennywhistle jive by The Benoni Flute Quintet, a group that had a big hit with their recording of ‘Skanda Mayeza’ in 1930. The tune was originally recorded as a vocal and The Benoni Flute Quintet picked up the tune on their penny whistles; their playing of it established the tune as one of the all time favourite with the Africans. On this compilation the original humorous spoken intro is kept intact, later versions were released without this spoken intro. 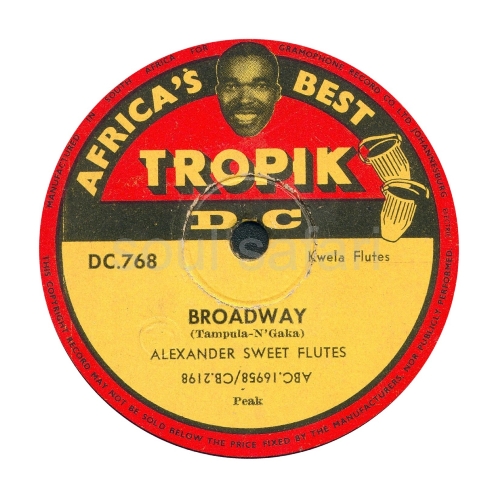 Hear the battle of wild basslines in ‘Ek Se Cherry’ by Lemmy Special with vocal group The Mofolo Kids (1960). ‘SesirInyembezi’ is a superb Zulu cover version of the American original doo-wop hit ‘Book Of Love’ (The Monotones) by The Batchelors featuring ThokoTomo (1962)

Or listen to the delicious vocal harmonies of ‘Flying Jazz Twist’ by Twisting Sisters, a vocal group who were popular enough in the 1960’s for Gallo Records to release two hot sides on one platter. In 1956 Aron & Pieter did the mambo, African style while the festive upbeat vocal swing of ‘Tshidi’ by Martindale Stars (1960) remains timeless.

All recordings were prepared and mastered from the original 78 rpm shellac discs as found in the archives at ILAM in Grahamstown, South Africa. The goal was to clear the dust and dirt of decades gone by, while preserving the original dynamics and keep the sound as little altered as possible. 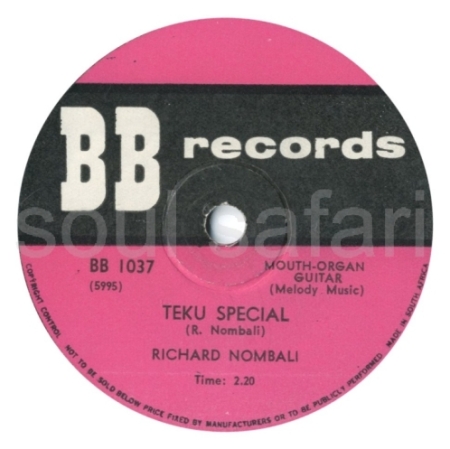 over the weekend I dug into the finds of my latest SA trip last March. Still a few boxes of records to unpack, an activity that always brings a lot of joy and new insights in South African music history.

Like this single by The Kwela Kids Plus One featured here today, released in September 1969. I had expected the standard Kwela jive fare but was totally surprised by the sophisticated jazz beats.  The guitar of Joshua Sithole binds the rhytmic structures nicely together and adds an unique touch of jazz excellence. While the flute on ‘Duke In Soul’ is paying homage to the horn section of the Duke Ellington Orchestra indeed… 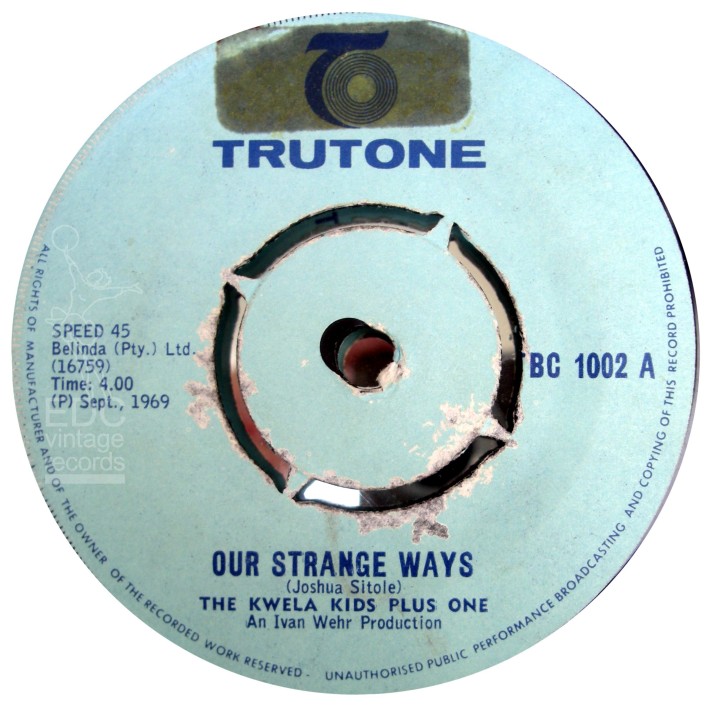 The Kwela Kids Plus One -Our Strange Ways

Writer of these songs  is Joshua Sithole,  his music taking inspiration from the kwela and mbaqanga styles.

As a self-taught lead guitarist Joshua began busking with the Kwela Kids in 1959 in Cape Town and later with Sipho ‘Hotstix’ Mabuse in his group The Beaters in Johannesburg. Note also the misspelling of his name as Joshua Sitole on earlier recordings.

The Kwela Kids Plus One -Duke In Soul

In 1978 he went solo and played in venues around the country, thrilling audiences with his distinctive style. During the eighties he became known to Durban audiences through his various residencies at places like the Lonsdale and Westville Hotels.

Sithole was born in Rylands, but his family moved to Gugulethu during the era of forced removals. He was committed to his family and to passing on his skills to others. Josh Sithole, one of Cape Town’s best-loved musicians and a favourite of many South African music-lovers, died on Sunday 20 June 1999.

excerpts from an article from the AFRICAN INVASION OF ROCK website

the late Basil ‘Mannenberg’ Coetzee, whose musicianship stems from the streets and has stretched to the jazz halls of Europe, stated emphatically that his musical guru is Dollar Brand, and that him and his music is just an extension of the man who influenced him strongly through his musical growth. . He earned the nickname “Mannenberg” after the hugely succesful collaboration with Dollar Brand in the late seventies. Basil toured and recorded extensively with Brand (Abdullah Ebrahim)

Dollar Brand took him to Europe and they blew up a storm in the halls of Germany, Switzerland, Denmark and Sweden, making people rave to the strains of Mannenberg.  Basil is very much a musician of the people. At the age of 13, he took to the streets with his penny-whistle to earn some money.  He switched to the concert flute three years later. The penny-whistle and concert flute were steps up his musical ladder to the saxophone which he took up when he was 21. He never had any music lessons, picking up the sound with his finely tuned ear.

SAbENZA was actually  a project of former Pacific Express members lead by Basil. Sabenza –derived from ‘SA Band” and the Zulu word for work ‘sebenza’, was the work of Basil, Robbie Jansen, Paul Abrahams and Jack Momple who had all left American influenced jazz in search of their Cape roots. The record came out originally on Mountain Records, here is a later version on Kijima. Great Cape Jazz…   ‘Sabenza’ has all original compositions, and its genesis was the unrest period of 1985. He terms his music ‘people’s music’.  Basil Coetzee is noted as being in the ranks of the top saxophonist in South Africa, and like his musical mentor, Dollar Brand, his horn blowing is leaving indelible marks in our musical history books.*

here’s a rare original from 1976, a composition by Coetzee. He plays the penny whistle on both sides

and another early composition by Coetzee, probably mid-60’s. Sung by vocal group The Four Yanks

the original songs in their full length can be heard in previous posts.  Zulu Jive, Marabi Jive, Xhosa Vocal…soul and jazz grooves with an unique South African flavour  were selected and highlighted  in the YEBO! series. Thank you for all your feedback.

Reader Nick “All I can say is… wow. I love the soul and jazz-infused Makgona Tsohle Band 45rpm, it is one I had never come across previously. Thank you for sharing these musical treasures, they are all sublime and are all very much appreciated.”

Long, long ago, African herd-boys used to play bamboo whistles which are known in the African language as ‘mahlaka’. As time went on these were replaced by tin whistles as the bamboo was not strong enough and did not last. These tin pipes have been greatly improved and are what we now call ‘penny whistles’. The penny whistle became the popular instrument of little African boys and they could be heard playing on street corners and in the townships, where they attracted much interest and attention.

in the mid 1940s Pennywhistle jive was developed. Kwela, a Zulu term means “pick-up” and refers to roving police vans on the look-out for illegal street corner gambling. When the police came in sight all evidence of the game would be hastily hidden and somebody would substitute the event with harmless flute music until the immediate danger was over.

Recording scouts, realizing the talent of these penny whistle players brought them to recording studios and the penny whistle records have proved tremendously popular with Spokes Mashiyane being the biggest star.

The EP “Music and Rhythms of Africa vol. 1”   features four recordings by Benoni Flute Quintet and the Alexandra Shamber Boys. One of the most popular flute groups is the Alexandra Shamber Boys who have made a big name for themselves in Johannesburg. “Phazamiza Zacks’ one of the tunes they play on this record is a tribute to the great Zacks Nkosi. The Benoni Flute Quintet had a big hit with their recording of ‘Skanda Mayeza’. The tune was originally recorded as a vocal and these youngsters picked up the tune on their penny whistles; their playing of it established the tune as one of the all time favourite with the Africans.

‘Finish’ by The Alexander Shamber Boys is a later version re-recorded version while the original song ‘Tom Hark’  was popular in the mid-fifties.

here is the  original 78 rpm by