today’s post combines two artifacts from Mali into one LP; masks from Mali and music by one of Mali’s (almost) forgotten orchestras, Kanaga De Mopti. As this re-release is still is quite new and I do not wish to boycot any sales of the album I have only included one mp3 of this album as a taster. Let me advise you to go out and buy it, that’s the best way to reward the hard work of the musicians and the record company too…I can guarantee that you will not be disappointed with the quality of these recordings.

In most African cultures of the peoples of Subsaharan and West Africa masks usually have a spiritual and religious meaning. They are used in ritual dances and social and religious events. A special status is attributed to the artists that create masks and to those that wear them in ceremonies. In most cases, mask-making is an art that is passed on from father to son, along with the knowledge of the symbolic meanings conveyed by such masks.

The masks of the Dogon tribe in Mali are probably the best known examples.

Malian music has received a lot of attention the past years, and it’s appeal will continue to spread with discoveries like this rare album by L’Orchestre Kanaga De Mopti, originally released in 1977. The band has the sound of a West African orchestra – unified in rhythm and melody. They are one of the region’s modern orchestra groups, who were were able to flourish in the golden age of West African state music funding. In 1977 the Malian government owned label ‘Mali Kunkan’, released a series of LP’s, including this must-have gem. It has been rereleased by Dutch label Kindred Spirits in its original LP format. 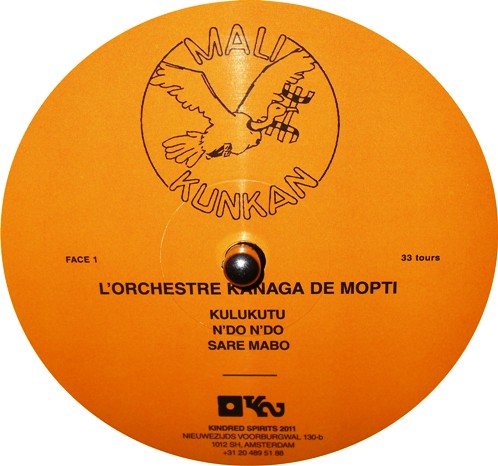