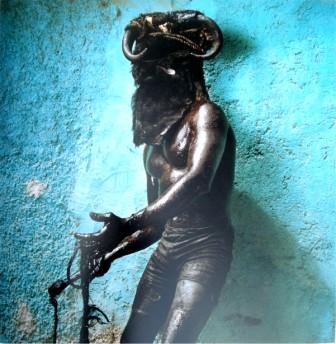 Maske is a Haitian kreyol word, meaning to wear a mask. Todays selection of text and some of the most stunning pictures of Haitian Vodou comes from the book ‘Maske’ by Phyllis Galembo.

This acclaimed book with thrilling photographs, showing masquerade performers in Nigeria, Benin, Ghana, Sierra Leone, Burkina Faso, Zambia and Haiti is a celebration of African art, and a work of vivid artistic imagination. Photographs of carnival characters, mostly rooted in African religion and spirituality, are presented in chapters organised by tribal or carnival tradition each introduced by a short text by Galembo about the characters and costumes portrayed. The art of masquerade is introduced by art historian Chika Okeke-Agulu, (himself a participant in masquerade events during his childhood in Nigeria). 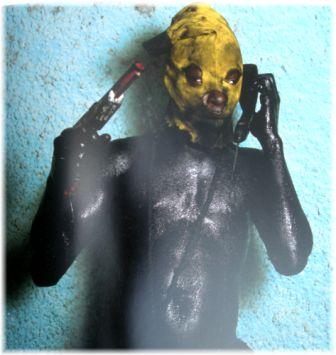 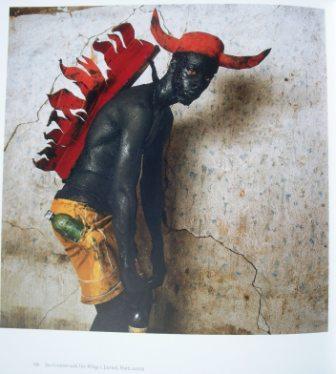 Within the African Diaspora, Haitian culture is known for its strong connection to Yoruba, Congo, and other Cross river cultures which, over centuries, slaves combined with influences from local Taino Indians and Europeans, and from Vodou.

For these photographs of traditional religious rituals Galembo went to Haiti, where she documented the traditional priests and priestesses of Vodou during Jacmel Kanaval, when troupes of musicians and dancers fill the streets. A wonderful yet dangerous event, the mood can swing wildy from exuberant joy to defiant aggression. Today, after the catastrophic earthquake of 12 January 2010, Jacmel Kanaval was cancelled and, as I write this, much of Haity including Jacmel, remains in ruins. 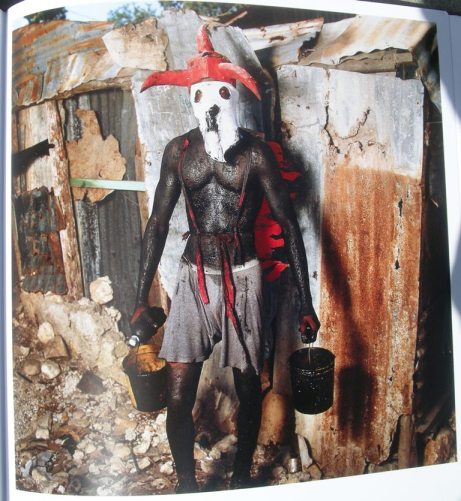 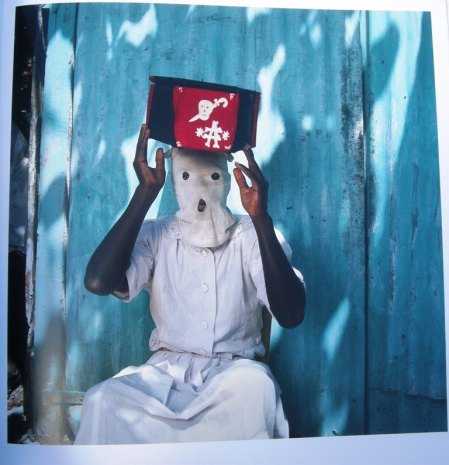 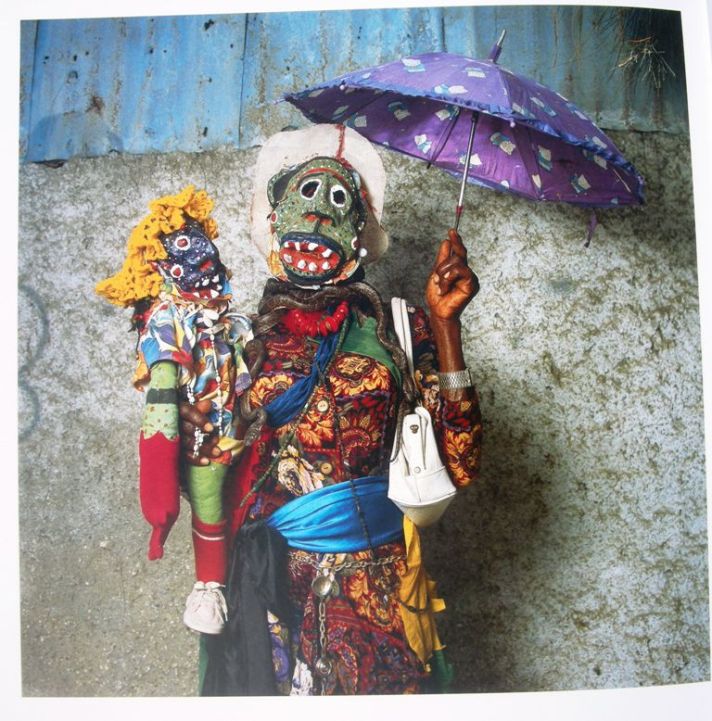 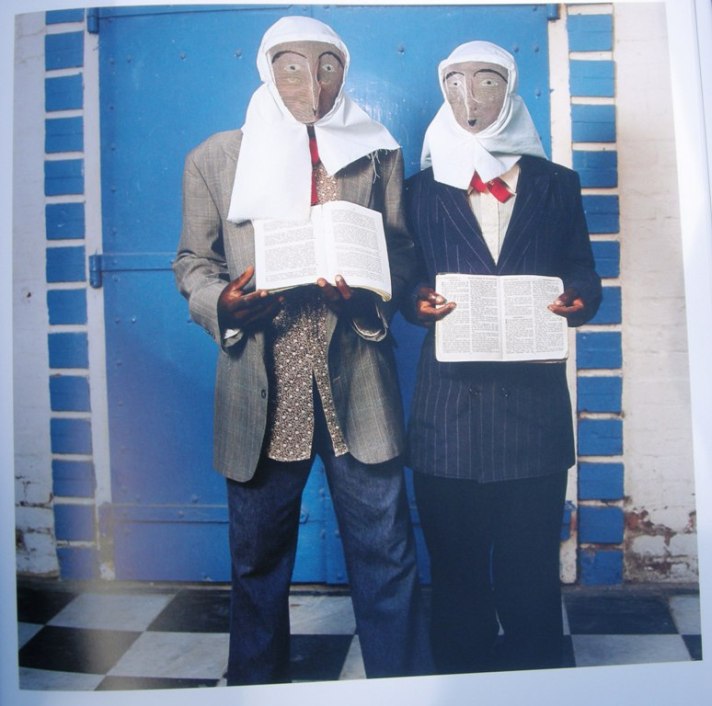 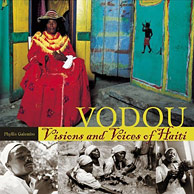 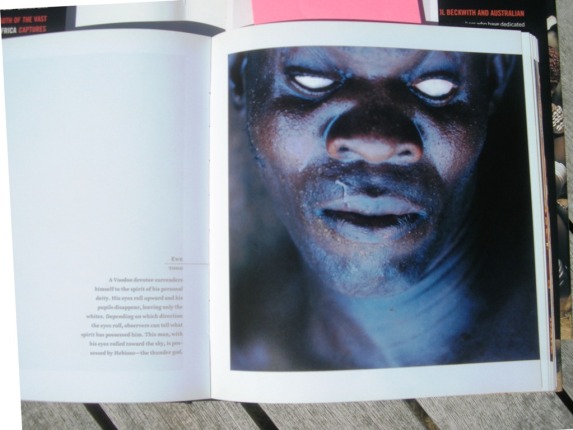 A Voodoo devotee from Togo surrenders himself to the spirit of his personal deity. His eyes roll upward and his pupils disappear, leaving only the whites. Depending on which direction they eyes roll, observers can tell what spirit has possessed him. This man, with his eyes rolled toward the sky, is possessed by Hebioso, the thunder god.

This seminal volume first published in 2009 is a landmark. The award-winning team of photographers Carol Beckwith / Angela Fisher and authors of African Ark present a stunning selection of 250 full-color portrait photographs from across Africa, spanning every region of the continent, from the Islamic Africans of the North, to the tribal cultures of sub-Saharan Africa, to the people of the South, in a compact edition of their acclaimed book.

one of the most fascinating books about African masks that I own must be ‘Maske’ by Phyllis Galembo,  a professor of Art at the State University of New York whose pictures are frequently exhibited in museums around the world. Her work is also collected by all major institutions such as the Library of Congress in Washington DC, the MOMA in NYC etc.

Galembo’s previous books include “Divine Inspiration; From Benin to Bahia” (1993), ‘Vodou, Visions and Voices from Haiti “(1998) and” Dressed for Thrills, 100 Years of Halloween Costumes and Masquerades “(2002). From Zambia, Nigeria, Ghana, Sierra Leone, Benin to Haiti “Maske”(2010) showcases the most beautiful photographs of masquerades from Africa and its diaspora. A well recommended photobook!

For over two decades, Phyllis Galembo has documented cultural and religious traditions in Africa and the African diaspora. Her subjects are participants in masquerade events-traditional African ceremonies and contemporary fancy dress and carnival-who use costume, body paint and masks to create mythic characters . Sometimes entertaining and humorous, or dark and frightening, her portraits document and describe the transformative power of the mask. With a title derived from the Haitian Kreyòl word ‘maské’, meaning ‘to wear a mask’, this album features a selection of over a hundred of the best of Galembo’s masquerade photographs to date. Organised country-based chapters, each with her own commentary.

The West African State of Benin borders Ghana, Nigeria and Burkina Faso. In the 1970s the former Dahomey knew a truly incredible wealth of mind-blowing funk bands, from cities such as Cotounou, Porto Novo and the absolutely unknown -until very recently- Parakou capital in the North Province, near the border of Nigeria.

Just like in Mali and Guinea the musical competition in Dahomey/Benin was huge and fanatical. In addition to Orchestre Poly-Rythmo de Cotonou and other bands, as showcased on the top compilation “African Scream Contest” -of the extremely interesting label and blog Analog Africa-were exposed to the outside world for the first time. The label brings back the music of the band Super Borgou Department de Parakou to life and finally it gets all the credit it deserves.

All due to the deep diggin’ of the mastermind behind the Frankfurt based label, dj Samy Ben Redjeb. The man, who has a sixth sense for detecting unknown and obscure, raw top funk, undertook a quest for musical treasures in the small country of Benin. He ended up in barns and dusty warehouses of the Dendi and Bariba tribes where unknown music was waiting to be discovered. He also met musical entrepreneurs avant la lettre, who linked whole generations of musicians and a couple of particularly creative record label owners.

Super Borgou Department originated in Parakou where guitarist/organist Moussa Mama Djima was inspired first by his father, a gold-and silversmith who discovered highlife in Ghana in his youth. That was his first and true love. The rumba/soukous music of legendary bandleader/singer and guitarist Franco, from Zaire, was one of the other sources of inspiration.

The Islamic-tribes Bariba and Dendi made dance music covering different levels of stirring emotions, trance and excitement. On the beautifully designed  vinyl double package  by Super Borgou, “Rhythms Of Black Sparta”, from 1976, you can hear mesmerizing soul, funk grooves ala  James Brown, next to Bariba versions of Afrobeat mixed with local folklore, soul and Bariba and Dendi Pachanga-dance styles, just a tad different in style and groove.

It impossible to stand still when listening to the 15 tracks on this double album. The roar of the whining organ that grooves with the (ultra)short funky rhythm guitar licks  blends into titillating, trance inducing rhythms of many percussion instruments, to bring the listener into an absolute climax.

Check the exciting organ-driven “Ko Guere”, based on Bariba folklore,  which is an absolute cracker, just as “Abare Klouklou” is.  Bold horns, a compelling rhythm, chorus, and melody. Just like the crazy track “Adiza Claire”, based on wild Cavacha rhythms, clearly derived from Zaire’s rumba styles.

Bandleader, composer, guitarist and keyboardist Moussa Mom Djima unfortunately passed away in 2007, but Super Borgou Parakou continues the legacy of their leader with a retroactive effect.  Insanely good trance-n-dance-music.