Gibson Kente was a South African playwright, screenplay writer and musician. He also taught many high profile South African performers how to act, sing and dance, including Brenda Fassie and Mbongeni Ngema.

One of his earlier works ‘Sikalo’ (1966) was already in my collection but ‘How Long’ is another eye-opener. Musically the compositions are quite diverse, from African jazz to hymns, beautifully performed by a group of singers and musicians unknown to me; Zakithi Diamini, Zakes Kuse, Mary Twala, Ndaba Twala and others.

The condition of the LP was poor, scratched vinyl, torn worn cover with the name Bra Cecil on the labels, it clearly was once a well loved record in a township somewhere….

I thought that the theme of this musical and the music fits the date and spirit of this post perfectly. The musical ‘How Long’ is a document that reminds me of the horror of the Sharpeville massacre on March 21, 1960. Exactly 60 years ago. Today 21st March 2020 we commemorate Sharpeville and Human Rights Day.

Both sides of this LP can be heard in their integrality with all the crackle and hiss but the music still stands proud.

Read the story below on Sharpeville….

Sharpeville massacre, (March 21, 1960), incident in the black township of Sharpeville, near Vereeniging, South Africa, in which police fired on a crowd of black people, killing or wounding some 250 of them. It was one of the first and most violent demonstrations against apartheid in South Africa.

The Pan-Africanist Congress (PAC), a splinter group of the African National Congress (ANC) created in 1959, organized a countrywide demonstration for March 21, 1960, for the abolition of South Africa’s pass laws. Participants were instructed to surrender their reference books (passes) and invite arrest. Some 20,000 blacks gathered near a police station at Sharpeville, located about 30 miles (50 km) south of Johannesburg. After some demonstrators, according to police, began stoning police officers and their armoured cars, the officers opened fire on them with submachine guns. About 69 blacks were killed and more than 180 wounded, some 50 women and children being among the victims. A state of emergency was declared in South Africa, more than 11,000 people were detained, and the PAC and ANC were outlawed. Reports of the incident helped focus international criticism on South Africa’s apartheid policy. Following the dismantling of apartheid, South African President Nelson Mandela chose Sharpeville as the site at which, on December 10, 1996, he signed into law the country’s new constitution.

source; The Editors of Encyclopaedia Britannica

my best festival experience this year definitely was in South Africa in the city of East London, nowadays called Buffalo City, during the first big Maskandi festival on 2nd March 19….what an amazing pow wow of tribes!
Ngiyabonga!

The program was spread over the whole day, from noon till midnight so I only had the change to witness only a few artists and dance groups….here is my impression of that magical day.

next saturday I will be travelling to East London, nowadays called Buffalo City, in the Eastern Cape province for the first big Maskandi festival in that era.

Maskanda or Maskandi is a Zulu folk kind of music, which has evolved and has become big in South Africa. Maskandi music is largely popular and mostly consumed in the Kwa-Zulu Natal province, given its rich Zulu heritage and significance to the Zulu tribe. In popularity Maskandi is the 2nd top selling genre in South Africa, after Gospel music.

In Durban the genre is called ‘‘the music played by the man on the move, the modern minstrel, today’s troubadour.” It is the music of the man walking the long miles to a bride or to meet with his chief; a means of transport. Maskandi music tells us of many stories of society, about one’s view of life and personal experiences. This style of music is distinguished by an instrumental flourish (izihlabo) that sets the tone at the beginning of each song, in a picked guitar style and rapidly spoken section of Zulu praise poetry, called “izibongo“.

The content is not always praise, though, and with pop, house and other influences Maskandi it has become more about the story telling ethic and the modern migrant culture, than simply about the musical style.

This Saturday Zulu troubadour Phuzekhemisi is among the best-known practitioners of the Maskandi genre on stage. Other legendary performers are Mpatheni Khumalo and Bheki Ngcobo a.o.

The festival is scheduled to start at 9 AM. Check tickets and prices at Computicket.

as part 13 in the series Township Soul & Boogie I proudly present one of Letta Mbulu’s rarest albums in existence. It may be one of those records that people sometimes refer to as a ‘holy grail’. “I’ll Never Be The Same (Mosadi)”  is without a doubt an ultra rare ‘lost’ Letta Mbulu LP, released only in South Africa on the Tamla Motown label in 1973. 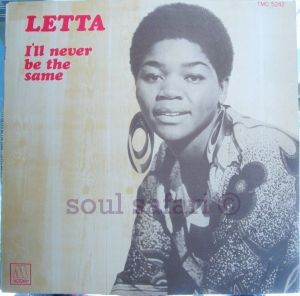 Actually, this LP is a compilation of material that was previously released on several albums with  some new songs added, probably recorded between 1970-1973. Parts of this album consists of songs that Letta recorded frequently as part of musical aggregates put together by Hugh Masekela – most spectacularly as part of the anonymous collective known as Africa ‘68 (which was also later credited as “The Zulus”), where she took the lead on “Uyaz’ Gabisa,” “Noyana,” “Aredze” (which she’d earler performed on Letta Mbulu Sings) and “Kedumetse.”

All tracks on this LP beautifully showcase Mbulu’s gorgeous vocal capacities and the heritage of Zulu songs stand out as proud witnesses of Letta’s South African origins.

Born and raised in Soweto, South Africa on 23 August 1942,  she has been active as as singer since the 1960s. While still a teenager she toured with the musical King Kong, — but left for the United States in 1965 due to Apartheid.

In New York she connected with other South African exiles including Miriam Makeba, Hugh Masekela and Jonas Gwangwa, and went on to work with Cannonball Adderley, David Axelrod and Harry Belafonte.

On screen, her singing can also be heard in Roots, The Color Purple (1985), and the 1973 film A Warm December,[ and she was a guest on a Season 6 episode of Soul Train. Mbulu also provided the Swahili chant in Michael Jackson’s single, “Liberian Girl”. Producer Quincy Jones has said of her: “Mbulu is the roots lady, projecting a sophistication and warmth which stirs hope for attaining pure love, beauty, and unity in the world.” 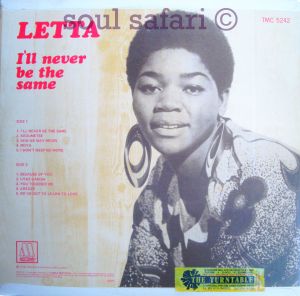 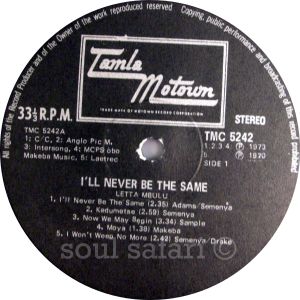 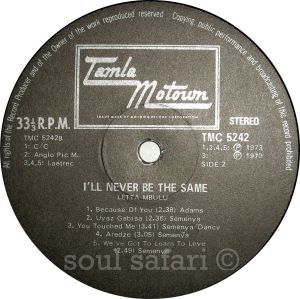 thanks to reader and collector Afrikola! 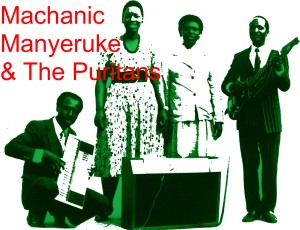 it doesn’t take much to make great music; a guitar, a synth and above all powerful voices praising the greatness of God…that is exactly that is on offer on this remarkable record coming out of Zimbabwe. Recorded in Harare and produced by Bothwell Nyamhondera. File under Gospel. 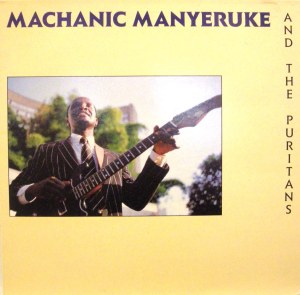 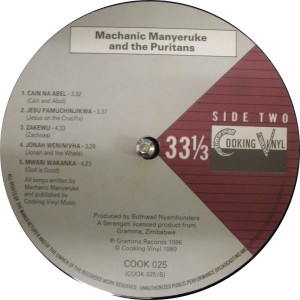 Machanic Manyeruke And The Puritans (Cook 025)

buy the album on Discogs