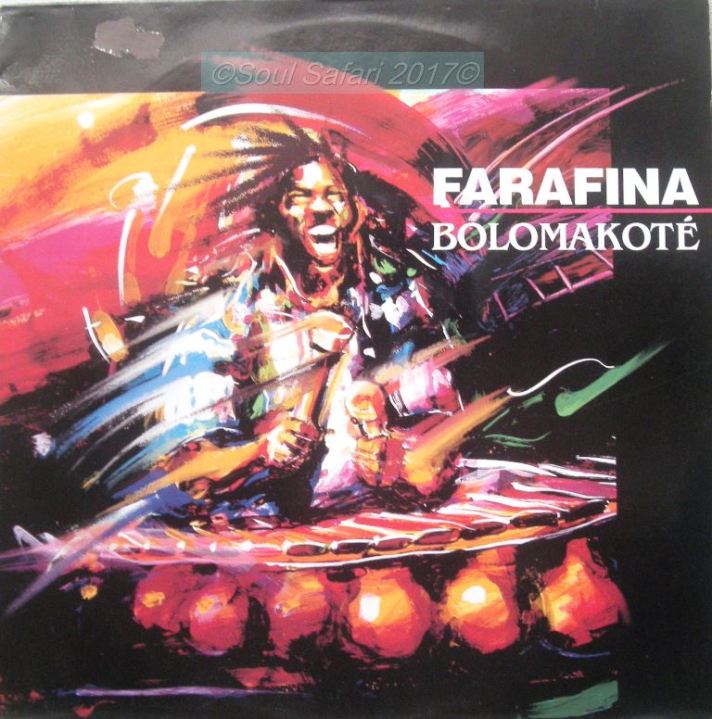 Farafina is a group of percussionists / dancers from Burkina Faso in West Africa, founded orginally by Mahama Konaté.

Excellent workouts on traditional African instruments like the balafon and djembé are recorded on this album, one of the standout tracks of ‘Bolomakoté’ is the track “Moroman Wouele”, an amazing rhythm journey with hypnotic chants! The track starts seductively like a North African belly dance morphing gradually into a faster samba rhythm. The latin theme re-appears even stronger on the B-side….dance-floor friendly album for sure.

Farafina’s ability to expand their music without denying their traditional instruments has enabled them to experience new forms and record with musicians such as Jon Hassell, the Rolling Stones, Ryuichi Sakamato, Daniel Lanois, Billy Cobham, Joji Hirota….

In 1988 Farafina worked together with Jon Hassell on an ambient/experimental album ‘Flash Of The Spirit’. The group played several times at the Montreux Jazz Festival, and stole the show at the famous Nelson Mandela’s birthday concert in the London Wembley Stadium.

Sad news came last friday when Ouagadougou was the centre of terrorists attacks claimed by an African branch of Al Qaeda. The hostage crisis ended in The Splendid Hotel with a total of 27 deaths.

In better times Burkina Faso was known as a relatively peaceful country.
The predominantly Muslim country located in the West African region is affected more often recently by the violence of jihadist militias. But previously the country remained relatively spared from jihadist violence, unlike neighboring countries like Mali and Niger.

It comes as no surprise to know that many French artists in the 60s and 70s went to Burkina Faso to perform or record music with local artists. Like Serge Franklin whose  artistic itinerary starts in France in the 60s as an author-songwriter when he published several 45s under his own name. The singer quickly became a studio musician as a sitar player and accompanied singers like Gilles Vigneault and Georges Moustaki at the Bobino theater in Paris, respectively in 1966 and 1969.

In 1971 Serge Franklin traveled to India where he perfected his skills on sitar under the pseudonym Adjenar Sidhar Khan. As a lover of primitive stringed instruments, Franklin recorded a rather remarkable album in Ouagadougou, featuring mainly local instruments like the cora, balafon, zanza and the bow.

The album contains a beautiful version of ‘Licha Wetche’,  a traditional song that was popular with many artists. See also the Bleached Zulu
“Pour Recevoir Vos Amis Comme À Ouagadougou, Afrique” by Les Griots was released in France as part of the series Exotissiomo in 1975. It is a collection of traditional songs, field recordings and newly written material by Serge Franklin, performed by local musicians.