I just came back from Paris where the walls of the city were plastered with posters announcing a 3 day ‘hommage à Miriam Makeba’ at the prestigious Cirque D’Hiver, near the Republique.  Tribute to South Africa’s most important music ambassador will be given by Angelique Kidjo, Asa, Ayo, Sayon Bamba, Dobet Gnahoré and many others on Friday September 25th -Sunday September 27th 2009. 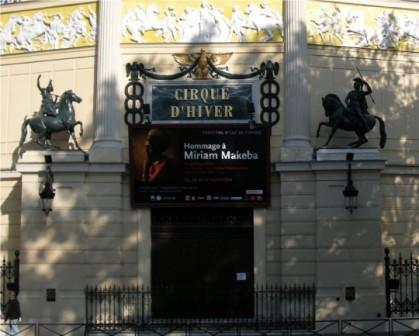 and here’s ‘Sawubona’, the inflight magazine of South African Airways with Makeba on the cover. Finally, a well deserved tribute in her country of birth after so many years in exile  and although Miriam is not longer amongst the living her music lives on to inspire new generations …welcome back!

there are so many Makeba favourites it is hard to pick one…but ‘Emavungwini’ from 1969 and this live-version of ‘Reza’, written by Brazilian musician Edu Lobo are certainly amongst my favourites.  Miriam Makeba was a singer who sang in many languages;  Xhosa,  Swahili, Portuguese, English… She became world famous after her departure from South Africa when she moved to the United States where her biggest hits were produced.

Miriam Makeba was the last vocal star to come out of the great era of the 1950’s and in some ways was also the most significant. Recorded on the eve of her departure for the United States, ‘Uile Ngoan’ a Batho’ is a musical re-statement of Miriam Makeba’s ‘Farewell to Africa’ and constitutes a tacit acknowledgement that perhaps many years of exile lay in store.

After a stint as a featured vocalist with The Manhattan Brothers, Miriam formed the Skylarks, her own female close harmony vocal group, then in 1959 toured as the show’s female lead with the theatre production ‘King Kong’ alongside Hugh Masekela, her future husband. Immediately after this triumph at the height of her fame, Miriam left South Africa to become the first international star from the African continent and an early protagonist in the fight against apartheid.

Makeba then travelled to London where she met Harry Belafonte, who assisted her in gaining entry to and fame in the United States. She released many of her most famous hits there including “Pata Pata”, “The Click Song” (“Qongqothwane” in Xhosa), and “Malaika”. In 1966, Makeba received the Grammy Award for Best Folk Recording together with Harry Belafonte for ’An Evening With Belafonte/Makeba’.

Her marriage to Stokely Carmichael (of the Black Panthers) in 1968 caused controversy in the United States, and her record deals and tours were cancelled. As a result of this, the couple moved to Guinea where Miriam formed the group ‘ Quintette Guineen’ with whom she toured and recorded. One of the best ways to experience the singer is through her live-recordings. This album is certainly one of her better live-recordings and it was recorded at the Palais du Peuple de Conakry (Guinea). Her strong politic views shine through on this superb album that was released on the label Editions Syliphone Conakry (SLP 022)

On 9 November 2008, she became ill while taking part in a concert organized to support writer Roberto Saviano in his stand against the Camorra, a mafia-like organisation local to the Region of Campania. The concert was being held in Castel Volturno, near Caserta, Italy. Makeba suffered a heart attack after singing her hit song “Pata Pata”, and was taken to the “Pineta Grande” clinic where doctors were unable to revive her.

just like ‘Pata Pata’ the song ‘Mbube’ is one of the seminal performances of South African musical history. Traditionally the song is about the celebration of the killing of a lion that was later reworked as ‘Wimoweh’ by The Weavers in 1952 and then, taking the melody of the final falsetto, as ‘The Lion sleeps tonight’ by The Tokens in 1961. Both these charted as number one hits in the US and inspired in turn countless reworkings by scores of other artists. It is surely no exaggeration to claim that ‘Mbube’ is now the world’s best known African-originated melody.

The original version was also enormously popular and sold particularly well in the townships where there was a high concentration of African-owned gramophones but was not really representative of the typical urban performance style of the day. ‘Mbumbe’ was derived from a style of acapella singing which developed among migrant, working class Zulus resident in male hostels. A system of inter-hostel acapella group competitions had precipitated the combination of various indigenous sources with an Afro-American close harmony style that had first been introduced in South Africa in the 1890’s. Solomon Linda, a migrant himself who worked for Gallo Records as a record packer, then pioneered several critical innovations; group uniforms, highly polished but softly executed dance routines and a new variation of four part harmony where a high, usually falsetto lead was set against multiple bass voices.

see this video with rare footage of Miriam Makeba