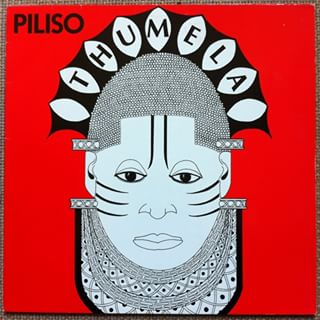 I  wish I could find some more info on this rare album by Piliso, released in Holland only in 1983. Unfortunately nothing pops up on Google or anywhere. Discogs clarifies that the same album was released in 1979 as Uwandile ‎– The Tie Breaker in Nigeria. A few acetates were cut at Trident Studios in 1981 for release of album by Boom Records in Nigeria. Not sure if the Boom release ever happened.

Some info from the sleeve of the Dutch release; Uwandile Piliso is a singer and hails from Johannesburg, South Africa

Thumbs up to reader Afrikola for his valuable comment. This post was edited on June 16th 2015 and the following info added

This was a group of South African exiles in Nigeria at the time. Wandile also played with Themba Matebese in his T- Fire group that got comped on some Soundway Nigerian compilations.That group featured big names from Africa 70 , like Lekan Aminashaun,Tunde Williams and Kenneth Okulolo. Andre Abrahamse and Josi Ndlovu from Zimbabwe did a nice AfroDisco album called Amandla , as well as backing the drummer Butley Moore on his own record , Happy Merry Music.All from around the same time on Boom Records.After coming back from exile , Andre Abrahamse was a well sought after studio musician , appearing on lots of Jazz albums. Themba Matebese also produced the Basa Basa Soundz album Together We Win , that also got repressed on Peach River Records under another name Basa Basa Homowo.